Home city guide religious places in and around darbhanga

Religious Places In and Around Darbhanga

Darbhanga is well known as ‘Heart of Mithilanchal’ and ‘Cultural Capital of Bihar’. This city has been depicted in several religious legends and epics like “Ramayana” and “Mahabharata”. There are numerous religious places in and around Darbhanga which are much popular among devotees for their devotional significance. In fact, some of these temples are too old and date back to ancient times. Mahinam-Mahadeo-sthan, Shyama Temple, Catholic Church, Ahilya Sthan, Manokamna Temple etc. are some of the most famous devotional places in the city of Darbhanga.


Famous Devotional Places In and Around Darbhanga 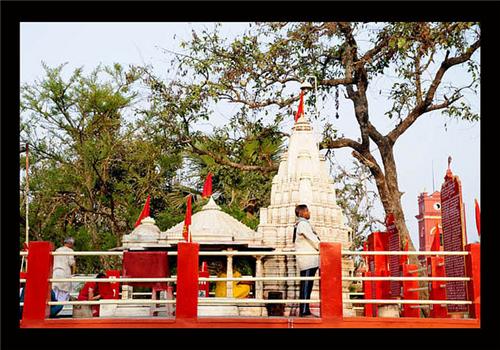 Manokamna temple is located beside Nargauna Palace in the University Campus. This temple is especially devoted to Lord Hanuman and well known for its beautiful construction. A number of devotees come to visit and offer their prayer in the temple.

Kusheshwar-asthan is another famous religious spot in Darbhanga. It is located approx. 22 km from Hasanpur Road railway station which lies on the Samastipur, Khagaria Branch line of North Eastern Railway in Darbhanga. This is an ancient temple which is devoted to Lord Shiva and popularly known as Kusheshwar asthan. This place is one of the most visited temples of Lord Shiva in this region. Devotees visit this place throughout the year to get blessed with grace of Lord Shiva.

Ahilya Sthan is one of the most famous religious spots in Darbhanga region. This ancient temple is dedicated to Devi Ahilya, wife of Gautam Rishi. Ahilya Sthan is situated approx. 3 km far from Kamtaul Railway Station in Jale block of Darbhanga district. Ahilya Sthan is also known as Ahilya Gram. A very famous legend is associated with Devi Ahilya and this place which has been depicted in Ramayana. As per that legend it is famous that a stone turned into a woman when it was touched by feet of Lord Rama. 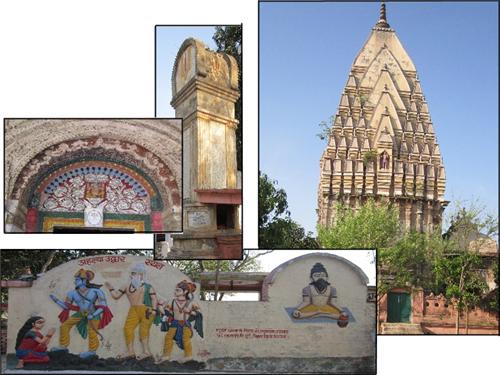 woman was actually Devi Ahilya who was turned into stone due to effect of curse given by his husband, Gautam Rishi. Devotees from distant places come here to offer their prayers to Maa Ahilya. Large annual fairs are held here on Ramanavami and Vivah Panchami in Hindi month of Chaitra and Agrahayan respectively. These fairs are much popular among locals and visitors as well.

Mahinam-Mahadeo-sthan is famous ancient temple of Lord Shiva located in Darbhanga region. This temple is about 5 km distant from Darbhanga-Biraul pucca road. This place is also famous for large fairs which are held every year on auspicious occasions of Kartik and Maghi Purnima. Though devotees in large numbers visit this temple throughout the year but this number increases significantly during fairs and festivals.

Makranda is another famous devotional place in Darbhanga. Makranda village is located at distance of about 5 km from Manigachhi railway station in Darbhanga region. This village is far famed for its old temple called Baneshwaristhan. Numbers of devotees come to visit this temple every day.

Shyama Temple is one of the most visited temples in Darbhanga. This temple is situated in Lalit Narayan Mithila University at mere distance of 1 km from Darbhanga Railway Station has been build upon cremation ground of the royal family. Built in 1933 it houses an impressive idol of Goddess Kali . It is believed that all the desires get fulfilled if one prays with holy heart in this temple.

Nawadah Durga Sthan is the most popular temple of Goddess Durga in Darbhanga. This temple is located on the Majkora Nawadah Road and numbers of devotee visit this place every day. Huge crowd of visitors can be seen here during celebration of Dussehra festival in this temple. 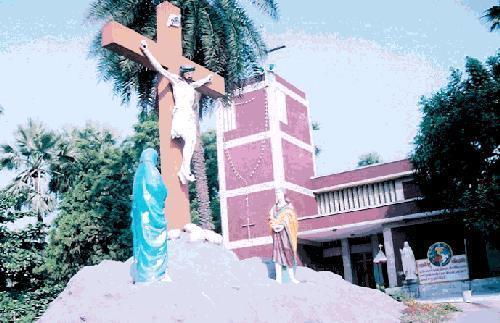 Catholic Church is famous place of religious importance in Darbhanga. This church was established in 1891 in old Baungla style and a symbol of Yesu masih is situated in front of the church. This Church is named as Holy Rosary Church and located just 1 km north of Darbhanga Railway Station. This church was demolished during earthquake in 1897 and was reconstructed later. Prayer was started in this church on 25th December 1991. Christmas festival is celebrated here with lot of enthusiasm during 25th - 31st December every year. Apart from that Anand Mela is organized on 7th October every year. People from far and wide gather here on every Friday for prayer.

Masjid at Darbhanga Tower is one of the most important religious places for Muslim community in this region. This masjid is located near Darbhanga Tower about 2 km from Darbhanga Railway Station. A huge crowd of people assemble every Friday for Namaj at this sacred place.